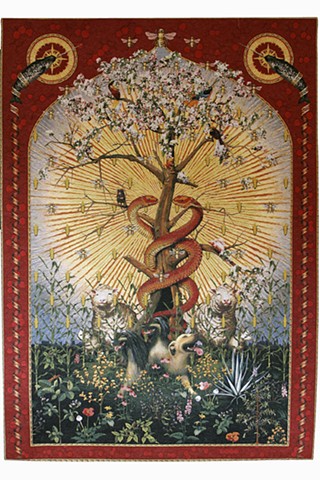 "Allegory of the Monoceros" is a woven Jacquard tapestry dedicated to the turning point of evolutionary forces from Darwinian Natural Selection to human centric evolution. The tapestry is inspired by the 15th century Unicorn Tapestries and weaves a tale of medicine, discovery and evolution through the ages beginning with early medicinal botanicals and ending in the gene age. Utilizing traditional textile design and botanical illustration and woven on a computer controlled jacquard loom in Belgium, the technology used to create the tapestry spans the age of computers from 19th century punch card to current CNC machinery. In the tapestry, a Cerberus made up of the first cloned dog fused with his genetic and birth parents sits guard at the base of an apple tree whose branch structure is based on Darwin's first sketch of his theory of Natural Selection titled "Tree of Life". A double helix of serpents weaves around the trunk of the tree, tying together creation myths and the current symbol of the medical profession. The tapestry is a tribute to the new forms of life being created and the species that lose their place in the new order. "At the center of the tapestry is a caduceus, the medical emblem of a sword around which two snakes are intertwined. It is quite like the staff of the god of medicine, Asclepius, which features only one snake; in Classical mythology, the caduceus signifies not medicine but peace, and also trade. The junction of medicine and trade is represented in the tapestry by two Dollies, the cloned sheep, who flank the center tree. The abundance of yellow corn growing in the foreground—one of the earliest genetic creations of man and still one of the most omnipresent and dangerously-modified—morphs into now threatened honey bees in the sky above. In the upper corners of the tapestry are sea monoceri—narwhals, whose horns have often been passed off as unicorn horns with magical powers—here captured, reigned in. Narwhals are real, not imaginary beasts, and they too are under threat of extinction. In Roth and Diaz Hope’s tapestry, it is not the mythical unicorn nor the Christ figure being persecuted, but natural selection itself. Roth and Diaz Hope announce an arrival of designed evolution. They make no sweeping political claims or moral accusations; though the work criticizes, it suggests no consequences and offers no solutions. Rather, it asks us to consider our own complicity, and reminds us that we do not know with what we are bargaining when we one-up the natural order of things."