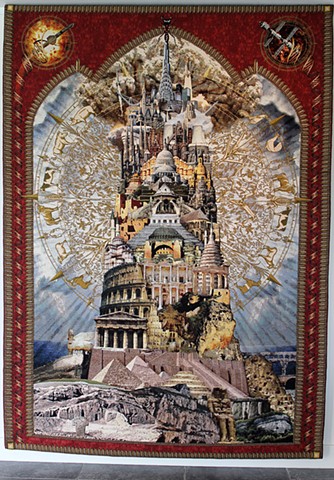 Allegory of the Prisoner's Dilemma

"And the whole earth was of one language, and of one speech. And it came to pass, as they journeyed from the east, that they found a plain in the land of Shinar; and they dwelt there. And they said one to another, Go to, let us make brick, and burn them thoroughly. And they had brick for stone, and slime had they for morter. And they said, Go to, let us build us a city and a tower, whose top may reach unto heaven; and let us make us a name, lest we be scattered abroad upon the face of the whole earth. And the Lord came down to see the city and the tower, which the children of men builded. And the Lord said, Behold, the people is one, and they have all one language; and this they begin to do: and now nothing will be restrained from them, which they have imagined to do. Go to, let us go down, and there confound their language, that they may not understand one another's speech. So the Lord scattered them abroad from thence upon the face of all the earth: and they left off to build the city." Genesis 11: 1-8 King James version

Allegory of the Prisoner’s Dilemma is the third and final tapestry of The Conflicts triptych and addresses the theme of human cooperation vs. human conflict at a time when this arbitration may determine the survival of the human race. The original Prisoner’s Dilemma is a game theory paradox that has inspired the creation of new evolutionary biology theory by showing that systems of cooperation regularly emerge in an environment where short term selfish action provides the highest potential individual reward.

Contrary to more dominant and savage interpretations of “survival of the fittest” and “might makes right,” cooperation has often been the path to success for individual organisms and societies. Genomes, cells, insects, animals, and human society are all heavily rooted in cooperation. Natural selection implies competition, yet as Harvard professor of mathematics and biology Martin A. Nowak says,”instead of opposing competition, cooperation has operated alongside it from the get-go to shape the evolution of life on earth, from the first cells to Homo sapiens.” From cooperative hunting and agriculture to urban planning and global trade, we work together to better insure our individual as well as collective success. At this point in history, it’s almost impossible for a human to survive without relying on those around them. Nowak calls humans “supercooperators” and attributes our cooperative power to language and information sharing. As we have increased circles of communication through technology, the ability to collaborate and cooperate has increased as well. As Nowak says, “As the human population expands and the climate changes, we will need to harness that adapatability and figure out ways to work together to save the planet and its inhabitants.”

Human evolution is now entering a new age of globalization that is deeply enmeshed with technology. Some technolgy experts theorize the near-future emergence of a global technological consciousness - sometimes referred to as the Singularity - at the rapidly approaching point that computers surpass human intelligence. At the same time, human populations continue to grow and expand their use of natural resources as well as affecting the very climate of the planet. We seem to be at a tipping point that could lead to global disaster or a new age of evolution, cooperation, and understanding.

This tapestry illustrates questions of how cooperation and competition have shaped and will continue to shape this trajectory. To convey this we focus our illustration on a massive Tower of Babel—a classic, though ultimately doomed, example of human cooperation based on global communication– against a backdrop of the history of agriculture. Compiled of a multicultural selection of iconic architecture, the tower represents a historical timeline rising vertically from the dawn of mankind to the present day, and ultimately disappearing into the uncertain and interdependent cloud of the future. Expanding on the theme of cooperation, we created this image in collaboration with visitors to the de young Museum of the San Francisco Fine Arts Museums, where we were Artists Fellows in 2012. We invited museum visitors to contribute their own ideas about what “Human versus Human” conflict means to them and buildings they thought we should include in our tower. In this way not only did we learn from a larger sampling of human experiences, but an element of public cooperation was incorporated into the creation of the piece.