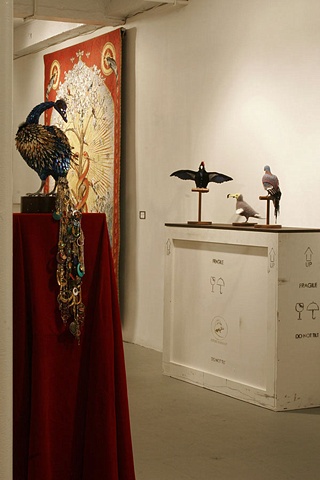 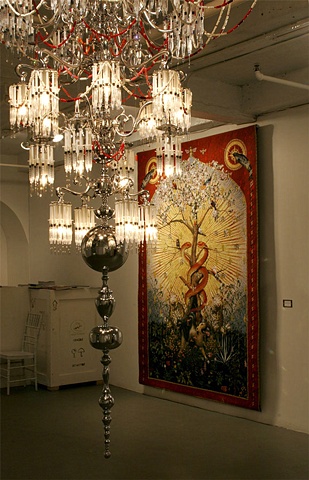 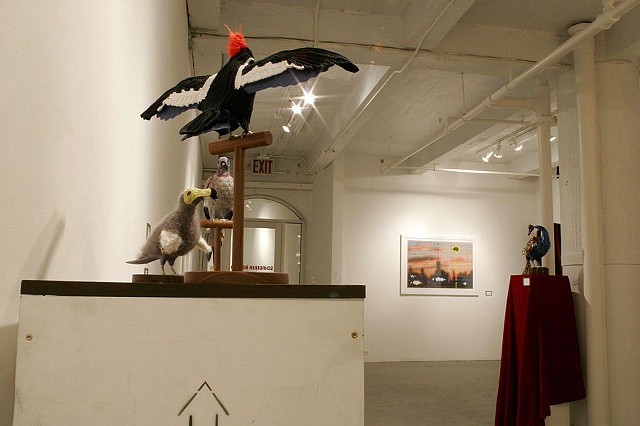 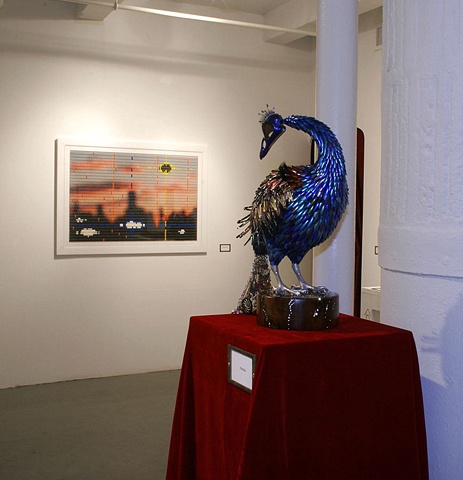 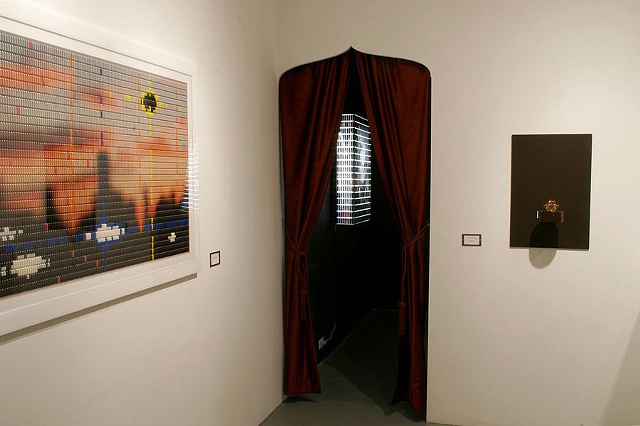 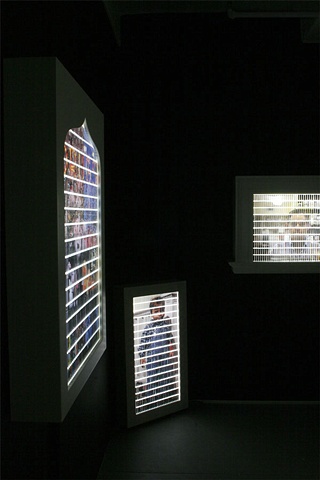 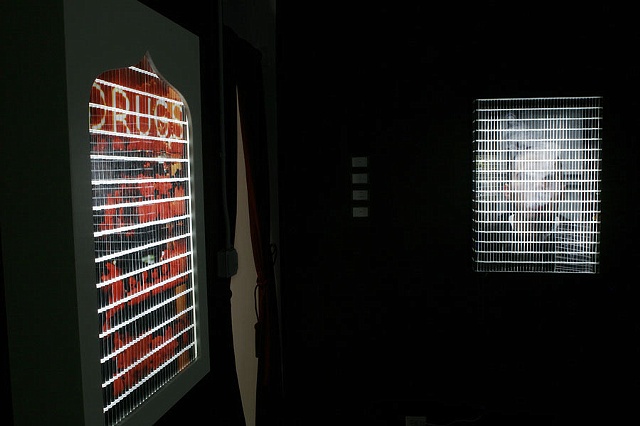 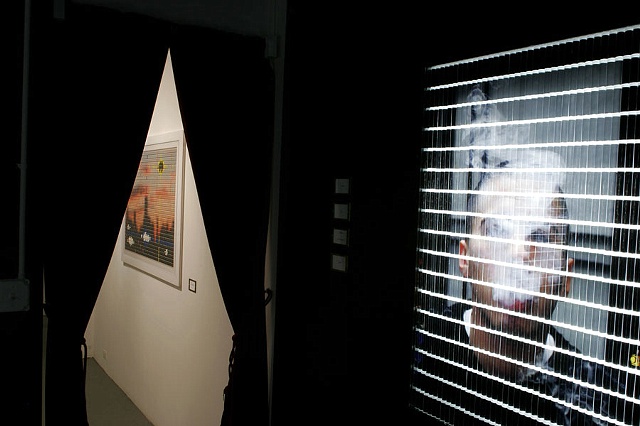 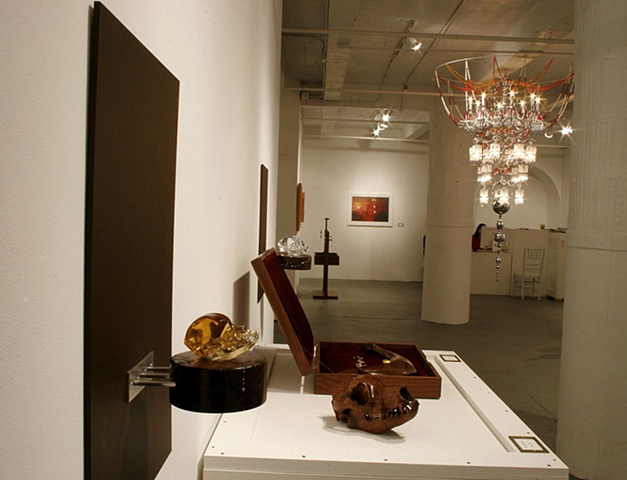 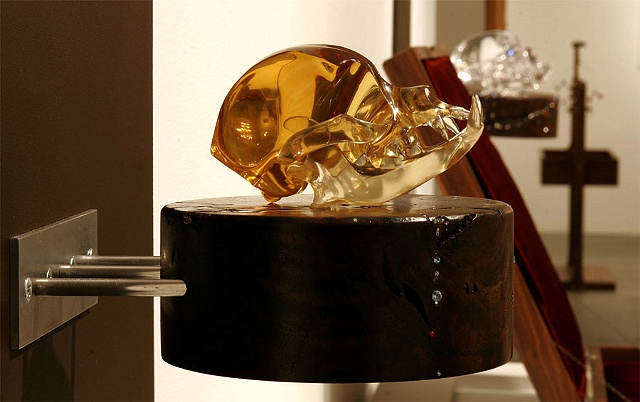 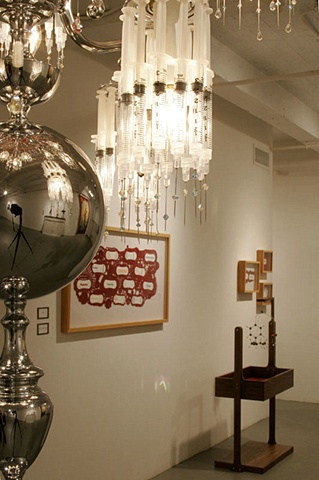 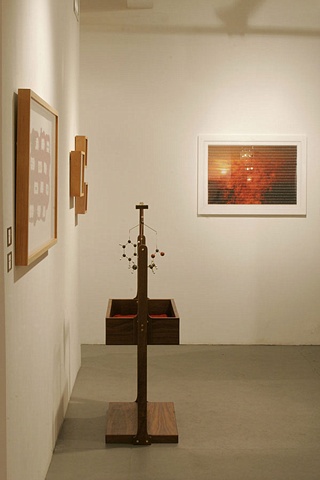 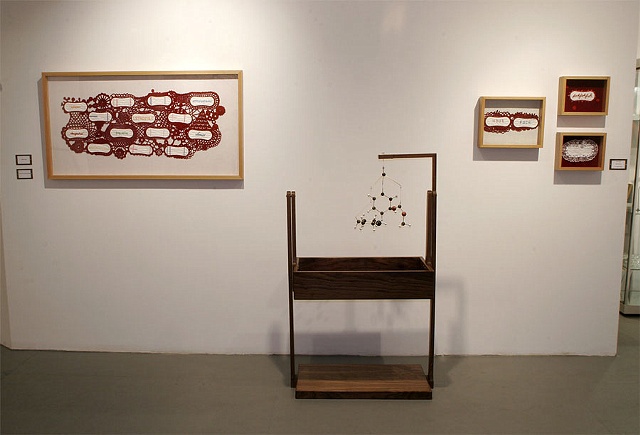 Future Darwinist is a multimedia installation dedicated to humanity’s desire to break free from the tethers of Darwin’s Laws. Modeled on a scholar’s salon from a past age that has been projected into the near future, Future Darwinist synthesizes the potential of modern science with the aesthetics and enthusiasm of the Age of Discovery. The nineteenth century was an era when the wealthy elite went on voyages of discovery without sacrificing the luxury of their plush, red velvet surroundings. It was also a time of unbridled enthusiasm for scientific thought and folly, when discovery and theory progressed by leaps and bounds as overeager collectors wiped out entire species in order to fill their collecting cabinets. This exuberance can still be found in today’s research climate, but the aesthetics of the Victorian era conjure a profound sense of adventure into the unknown that is more difficult to grasp with images of modern science.

No longer satisfied to work within the bounds of natural selection, the Future Darwinist strives to overcome the rigid restrictions of evolution. His collection cabinets display the best of his work. His walls are lined with the skulls of companion animals whose physiologies have been altered to please his aesthetic demands. He is surrounded by examples of his own interventions into natural selection, whether through examination of animals bred for food or with small suits designed for pigeons to disguise them as extinct birds, visually returning biodiversity lost through his own folly.

In his library, illuminated portraits of pharmacists and medical marijuana purveyors preside over landscapes of the post-Darwinian mental terrain, where one’s mental state is determined by psychopharmaceutical regimen instead of natural stimulus and genetics. In the living area, a colorful kinetic mobile of the Ritalin molecule soothes the Future Darwinist’s child. The room is decorated with a tribute to man’s control over the reproductive cycle and fertility in the form of a crocheted quilt of embroidered panty-liners. Illuminating the room is a chandelier sparkling with syringes and garlands of crystal and pills, illustrating the danger and allure of this newfound ability of the Future Darwinist to effect and control ever-expanding areas of body and mind.

A centerpiece of the Future Darwinist study is a 6.5’ x 8.5’ woven Jacquard tapestry dedicated to the turning point of evolutionary forces from Darwinian Natural Selection to human centric evolution. The tapestry, titled “Allegory of the Monoceros,” is inspired by the 15th century Unicorn Tapestries and weaves a tale of medicine, discovery and evolution through the ages beginning with early medicinal botanicals and ending in the gene age. Utilizing traditional textile design and botanical illustration and woven on a computer controlled jacquard loom in Belgium, the technology used to create the tapestry spans the age of computers from 19th century punch card to current CNC machinery. In the tapestry, a Cerberus made up of the first cloned dog fused with his genetic and birth parents sits guard at the base of an apple tree whose branch structure is based on Darwin’s first sketch of his theory of Natural Selection titled “Tree of Life”. The tapestry is a tribute to the new forms of life being created and the species that lose their place in the new order.

Our research in pharmacology led to a greater interest in science and society as a whole, in particular an aesthetic and thematic fascination with natural history exploration. Rather than merely romanticize cabinets of curiosity and collections of natural history, we consider this fascination a lens through which to explore our contemporary age. From the Age of Reason through the Age of Discovery to Darwin’s pivotal book On the Origin of Species, natural philosophers and citizen scientists created the framework on which our modern society operates. Early development of the scientific method, taxonomy, biology, chemistry, and genetics led to the Industrial Revolution, the downfall of monarchies, and the birth of modern society. Three centuries of exploring, cataloguing and experimenting have led to a wealth of knowledge and immense power over the fundamental processes of life on Earth, from gene-modification to controlling the reproductive cycle to cloning. We have moved from a world of natural selection to one of man-directed selection, from On the Origin of Species to On the Creation of Species. The modern era, sometimes called the Gene Age or the Third Industrial Revolution, has fields of study and exploration that open before us much like the new world and natural philosophy did for Victorian scientists, with a new awareness of man’s own hand in the creation and alteration of our current and future world. Evolution did not end with Darwin’s popularizing of his theory; the impact of man on his environment is now more than ever pervasive and all encompassing. Never before has man had greater power and responsibility over life on earth.